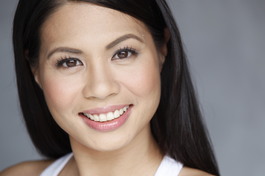 MISSY MARAMARA holds a Master of Fine Arts in Drama (Performance) from the University of Arkansas in Fayetteville through the International Fulbright Scholarship Program. She also trained at the L’École Internationale de Théâtre Jacques Lecoq in Paris and at Tectonic Theater Project in New York. A Filipino actress with television (Rosalka, Lobo, Kay Tagal Kang Hinintay, Maalaala Mo Kaya) and film (Maging Akin Muli, Bitukang Manok) credits, Missy is primarily a theater in actress.  Recent play credits include Nanette in Pilot Episode (CCP Virgin Labfest), She in Stage Kiss (Repertory Philippines), Soccer Mom in The Wolves (SUNY Oneonta, New York), Callie in Stop Kiss (Positive Space, LEAF Awards for Most Outstanding Actress 2019), Mitch in The Kundiman Party (Dulaang UP, Aliw Award for Best Actress in a Featured Role 2018), Her Ladyship in The Dresser (Repertory Phlippines), Actress C in The Dressing Room (DUP), Girl in A Girl is A Half Formed Thing (DUP), Woman 3 in The Vagina Monologues (New Voice Company), Lady Ann in RD3RD (ARETE), Kayleen in Gruesome Playground Injuries (UPSTART). She performed her solo shows Love Liz and Clytemnestra in the New York United Solo Festival, and toured Clytemnestra around Europe and the United States. Missy has performed in festivals and conferences in New York, Paris, Berlin and Prague. She is also a member of SPIT (Silly People’s Improv Theater) and a faculty of TWI (Third World Improv)

Missy is a tenured Assistant Professor in the Fine Arts and English Departments of the Ateneo de Manila University, a candidate for a PhD in English Language and Literature, and the moderator of Ateneo Blue Repertory and Dulaang Sibol JHS.

A few thousand years later, not a whole lot surpasses the Oresteia of Aeschylus in terms of good old-fashioned family dysfunction on an epic scale. The myriad conflicts of the House of Atreus do not ever die, the bloody ends of its primary members aside. Adultery, incest, betrayal, and – maybe most awful of all – indifference; it’s all here, alive, and eternally relevant to anyone interested in primal human drama.

From this rich mine director Kiara Pipino and actress Missy Maramara extract and isolate Clytemnestra, wife of Agamemnon and sinner also much sinned against. She is telling her story to the Elders of Argos, awaiting sentencing for having provided her conquering hero of a husband with a bath not precisely relaxing, and for similarly swinging an axe on Cassandra, the war prize Agamemnon casually brings home. If you are expecting a blast of female outrage, you will be disappointed. There is some fury, but what you more get is a mesmerizing journey of discovery taken by the lady and inviting you along. Maramara is peasant and queen, all woman, all human, and pretty much wonderful. She pins you down with her story and you relish the captivity. And a large measure of this wonderfulness is owed to Diane Rayor’s poetic fusion/translation of Aeschylus, O’Neill, and a few other tellers of the timeless tale. The language is gorgeous and takes you deep into the lady’s soul, so much so that you shudder at her brief reference to accepting the sacrifice of her daughter by her husband: that is what he meant to her.

In brief, this is a Clytemnestra true to the power and dimension of the regal and the ordinary. Not incidentally, Maramara plies a strip of scarlet fabric expertly to create babies, her man, distant vistas, blood, and her own implacable stature. It is the visual translation of how she manipulates the beauty of the script, and I do believe I will be seeing this stunning performance in my mind for some time to come.